Salt has been produced in the Cape Verde islands since the 18th Century. Pedra de Lume on the island of Sal (Salt in English) was one of the main areas for production. In 1985 the operations at Pedra de Lume ceased, but the site has become an interesting place for visitors. You can see the remains of the conveyor system, that could transport 25 tons an hour. A bathe in the water, which is only about 600mm deep is an interesting experience. The salt water makes it easy to float, and the experience is similar to bathing in the Dead Sea. So, if you are visiting Sal, include Pedra de Lume on your itinerary and take a dip in the water. Take some suitable shoes to use in the pool because of the sharp salt crystals.

Souvenirs at the entrance to the caldera on Fogo island.

Extra flights between Praia and Maio in the New Year

A gift of sports and school equipment for Maio Island 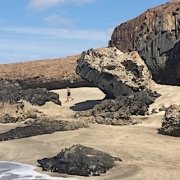 Photo of the week - Mindelo Beach

Carrying goods on the beach
Scroll to top