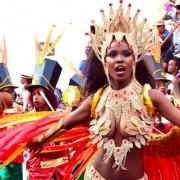 END_OF_DOCUMENT_TOKEN_TO_BE_REPLACED

We are now in the carnival season. Cape Verdeans know how to celebrate and there is fun to be had. In Mindelo on São Vicente the main Carnival celebration will be on the 13th of February, but the festivities will have commenced last night (Friday). It is worth visiting and joining in the party. Celebrations also take place on other islands in Cape Verde.

In common with many countries, this week has seen carnival take place; in the UK we only eat pancakes on Shrove Tuesday! In other countries is it party time. The largest celebration in Cape Verde is in Mindelo on the island of São Vicente. However, others take place around the islands including Sal, where there are celebrations in both Espargos and Santa Maria. At the weekend a procession started in Santa Maria at about 1am on Sunday with crowds of dancing people following a mobile disco. This processions ended up at Club 1 with a party that went on into the early hours.