This picture was taken at Faja d’Agua on the northwest of Brava when the seas were usually rough. The spectacular waves in this lovely bay (often referred to as the most beautiful bay in Cape Verde) were mesmerising. Brava is a lovely island with lots of vegetation and a most attractive main town of Nova Sintra. The island is the most south-westerly in the Cape Verde archipelago and is known as the island of flowers, partly because of the gardens in Nova Sintra. The little village of Faja d’Agua developed during the 18th and 19th Centuries, when whaling ships from America landed here.

Looking to Fogo from Brava

The Caldera on Fogo 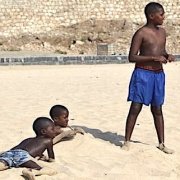 Children on the beach in Vila do Maio

The Caldera on Fogo
Scroll to top