The Cape Verde Islands are located in the tropics, 1800km north of the equator. Unlike more temperate climates, CV only experiences two seasons. There is the windy dry season (The Tempo das Brisas) and also the rainy season (Tempo das Chuvas). The latter is quite short, usually just August and September. Cape Verde sometimes has a dry mist (Bruma seca) partially due to Saharan sand in the atmosphere. This normally only occurs in the winter and usually around January or February. The Bruma Seca can, on occasions, be disruptive to both internal and international flights. The Cape Verde weather is lovely all year round. The best time to go to Cape Verde depends upon what you wish to do, but the high season is December and January.

The weather in Cape Verde averages temperatures of around 26ºC during the day. The Cape Verde climate offers visitors long periods of warm sunshine. For most of the year, humidity is relatively low. September is usually the hottest month, when the temperature can rise to about 35ºC. The months of January and February can be the coolest, when temperatures can drop to around 21ºC, and occasionally as low as 16ºC at night.

Slightly stronger winds are found between November and March. For those visiting the islands for surfing or kite surfing, etc., the wind means bigger waves in some resorts. Hurricanes are not unknown in Cape Verde, however they are rare. They usually form, or seed, close to Cape Verde, but then they move west towards the Americas. As they travel west they strengthen and consequently they hardly ever hit the archipelago.

The weather in Cape Verde in January is likely to be the coolest that you will experience. Although the temperatures will still be very pleasant reaching up 28ºC with an average of about 25ºC. The rainfall will be low (no more than 3mm), if any. It can be a windy month, which is great for wind and kite surfing. Humidity is usually around 60%. The temperature at night can be under 20ºC. The sea temperature averages around 23ºC. There can be odd sand storms, but these are short-lived and should not adversely affect your day. They normally last no longer than about 20 minutes. Occasionally Cape Verde bruma seca (dry mist) can occur at this time of year. This is caused by sand blowing from the sahara and it can sometimes disrupt flights.

In February weather in Cape Verde is lovely. You can expect an average temperature of around 25ºC, and the sea will average 23ºC, so excellent for partaking in all the water sports that are on offer. Humidity is usually around 70%. About 6 or 7 hours of sunshine per day can be expected, but it can also be windy. February is also the time to visit the islands if you wish to enjoy some of the festivals that take place, including Carnival. Occasionally the Cape Verde bruma seca (dry mist) can occur at this time of year. This is caused by sand blowing from the sahara and it can sometimes disrupt flights.

The March weather in Cape Verde is very pleasant. The hours of sunshine per day will be about 7 and temperatures will provide an average of 25.7ºC. Rainfall will be a rare event if there is any at all, probably about 1mm only. Humidity increases very slightly to around 71%. For water sports enthusiasts there will still be wind for surfing and kite surfing etc., but the wind drops after March.

In April, the temperatures in Cape Verde will normally reach an average high of 25.8ºC, and the wind speed is about 15.8mph. Rainfall will be a rare event and averages only 5mm for April. Relative humidity will be about 71%. Enjoying the magnificent beaches and swimming in the warm seas, which remain at about 23ºC, will be pleasant and inviting. This is a lovely time to visit this interesting and varied group of islands.

In May you can experience lovely weather in Cape Verde with temperatures on the rise, including the sea temperature rising to 25ºC, so excellent for enjoying the beaches. Rainfall will be very unlikely as the average recorded is zero. The average daytime temperature is likely to be around 26.3ºC, with a maximum of about 30ºC. There will be around 7 hours of sunshine per day. Relative humidity may rise slightly to around 73%.

By June the temperatures in Cape Verde are rising, the average daytime temperature being about 27.3ºC and the lowest 22ºC. Rainfall is negligible (average 3mm) and the winds are starting to reduce. Relative humidity can be a shade higher at 75%. This is still a good time for the beaches, or relaxing by the swimming pool. The hours of sunshine per day will reduce slightly to 6.

In July the temperatures in Cape Verde rise to an average daytime high of 28.4ºC. The sea is warm averaging 26ºC. There is small likelihood of getting a heavy shower, being the first rains of the season, but the average recorded is only 5mm for the month. Relative humidity will be on about 74%. There will be on average 5 hours of sunshine per day.

The weather in August becomes hot with average daytime highs of 29.8ºC, and the average low temperature being about 23ºC. However, this is also one of the wettest months, with a recorded average of 15mm of rain; there can be heavy showers on occasions. Relative humidity is usually on the rise at around 76%. The sea, however is likely to be beautifully warm with temperatures up to 27ºC. There will be about 5 hours of sunshine per day. Wind speeds drop to around 11.6mph.

September is the wettest month in Cape Verde; however, it is also the warmest month with average daytime highs of 30.3ºC and average night lows of 24ºC. The rain fall average rises to about 53mm spread over about 7 days. The relative humidity is at its highest in September at a recorded average of 78%. There will be about 6 hours of sunshine per day. Wind speeds remain low at 12.3mph. If the humidity and potential rainfall don’t worry you, there is a music festival on the island of Sal, in Santa Maria and also festivities for National Day amongst other events.

By October the rainfall is easing off and there is very little wind with average speeds of 12.9mph. The average daytime temperatures are 29.8ºC and average lows of about 23ºC. The weather is less certain in October with occasional storms, but rainfall is normally only expected on about 4 days during the month and reduces to an average of about 16mm over the month. Relative humidity is on average about 75%. There will be about 7 hours of sunshine per day.

November in Cape Verde is the start of the windy season, but with daytime temperatures at an average high of 28.3ºC and a low of 23ºC. So a lovely time for some winter sun. For those interested in surfing in all its various forms, this is the start of the big waves and the wind speed is on average 13.2mph.  For others the wind should not put you off, it is a lovely time to visit and the relative humidity has dropped to about 73% and so has the expected rainfall, which reduces to an average of 7mm for the month. You could expect to enjoy about 7 hours of sunshine per day.

December brings Christmas and the lovely warm dry weather in Cape Verde is ideal if you want to spend Christmas Day on the beach. An average high temperature of 26.4ºC and an average low of 20ºC and minimal rain (average of 10mm for the month) makes this a great time to visit these fascinating islands, such as Maio, Sal, Santo Antão, Santiago, Boa Vista, São Vicente, Fogo, São Nicolau and Brava. Relative humidity will be continuing to reduce to around 71%. For those interested in wind and kite surfing, the wind speeds non average are about 14mph.

Follow the link to the BBC weather website for Western Africa. Here you will find the latest video forecast, satellite images, predicted rainfall together with temperatures etc. Alternativly take a look at AccuWeather and maybe cross reference the data

The following information is intended to give an indication of the weather one can expect to experience in Cape Verde. The rainfall is very low, the longest of the bars below represents only 328mm in the whole year. The rainfall is based on recorded figures for the island of Sal. The daily temperature normally only varies between approximately 25°C and 30°C. The sea temperature only drops to about 23°C, consequently making very pleasant bathing temperatures.

The prevailing wind in the Cape Verde islands is from the north east. However, because the temperatures are high the wind makes for very pleasant conditions and is, of course, ideal for water sports enthusiasts. Many of the main holiday resorts, such as Santa Maria on Sal island, are on the south coasts and so sheltered from the winds. Kite Beach, also on Sal island, is great for kite surfing (hence its name) and is located on the east coast of the island, taking full advantage of the winds.

The windiest months are from about November through to March/April. These are the peak times for visiting the country and the most popular time for surfers. So, Windy Cabo Verde is an accurate description, but it should not spoil you holiday. On the contrary, it will give you pleasant, comfortable conditions and if you are into water sports, it will be an ideal location for you.

A Few Facts About The Cape Verde Weather

Temperatures in Cape Verde vary very little, with average daily temperatures of between 25°C and 30°C

Rainfall in most of Cape Verde is extremely low, with September experiencing the most rain with approx 6 days

The average daily hours of sunshine varies only a small amount usually between six hours and ten hours.

The prevailing winds in Cape Verde are the north east trade winds, which are at their strongest between November and March

The mountainous islands on Santo Antão, Brava and São Nicolau tend to have slightly more rain in some valleys, which are therefore greener

Hurricanes form, or seed, close to Cape Verde, but they rarely hit the islands, because they move west towards the Caribbean

The sea temperature is always pleasent with the average ranging  between 23°C and 27°C. Warm enough to enjoy the water AYR

At times there is a dry haze over the islands, which is known as the Bruma Seca and it contains sand from the Sahara Desert, which can occasionally affect flights

Cape Verde only has two seasons, Tempo das Brisas (Windy), which is November to July and Tempo das Chuvas (Rainy), which is August to October 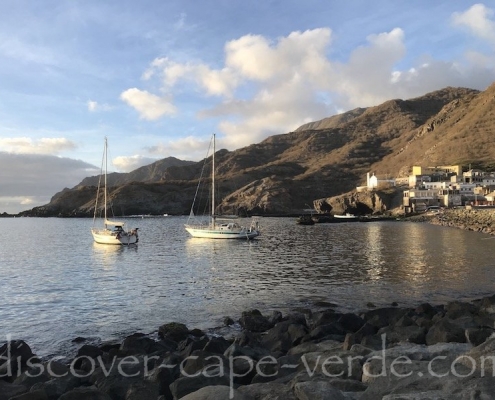 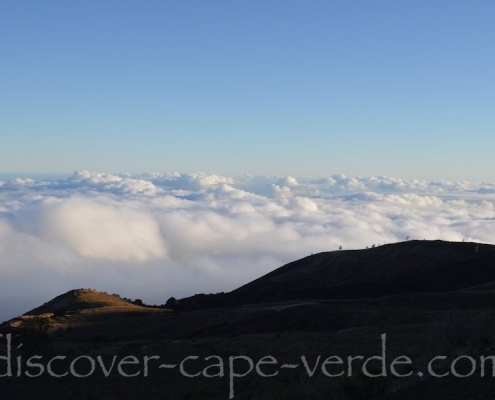 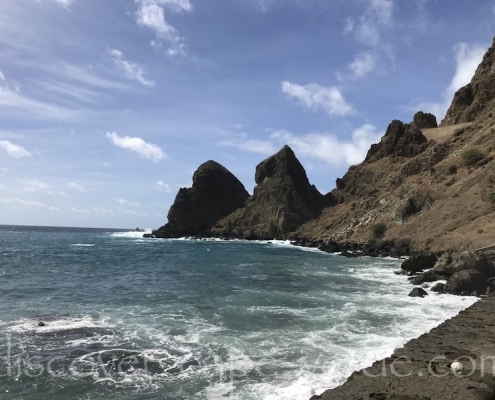 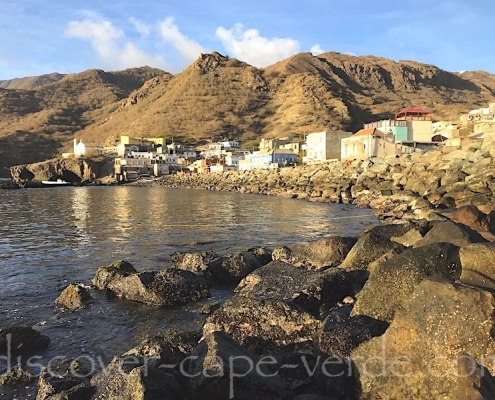 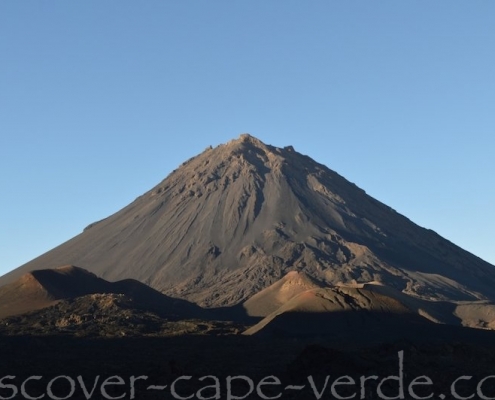 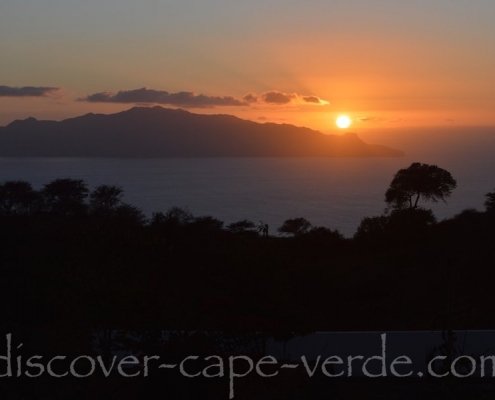 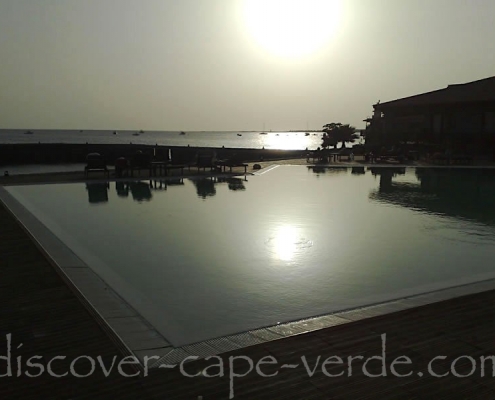 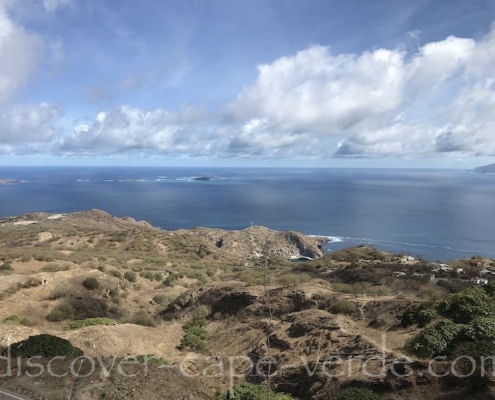 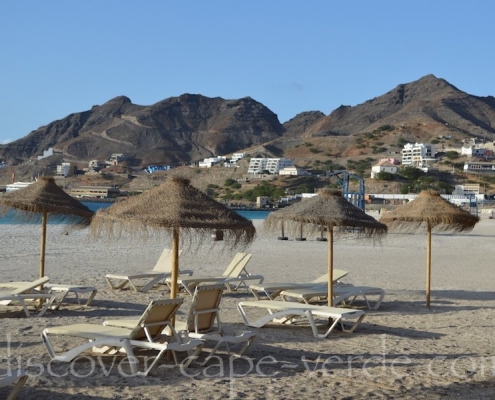 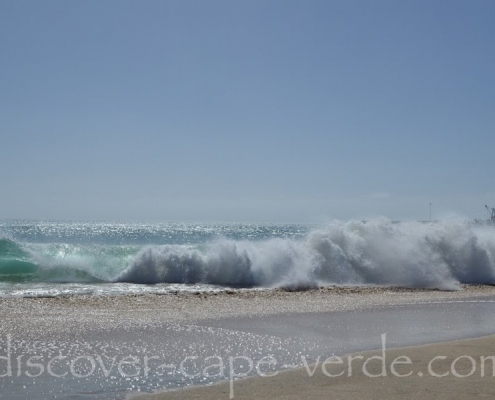 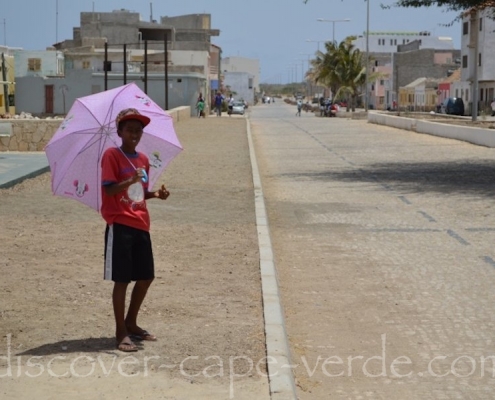 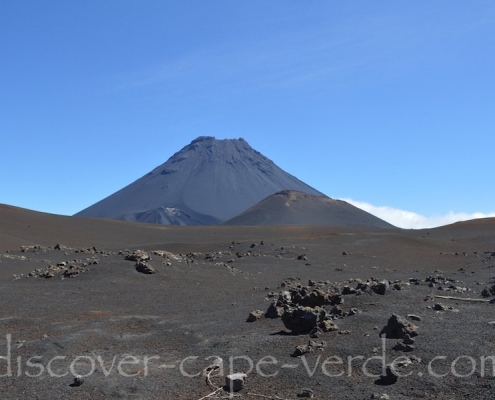 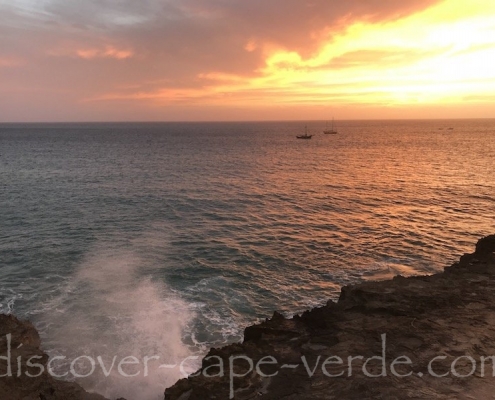 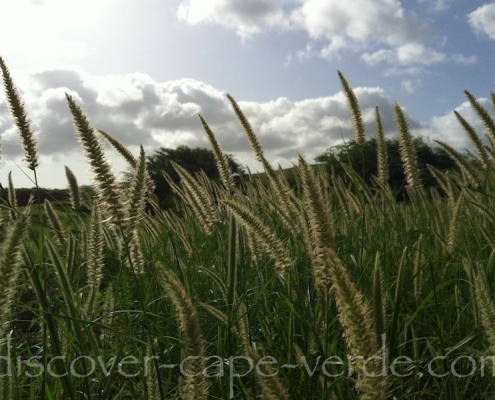 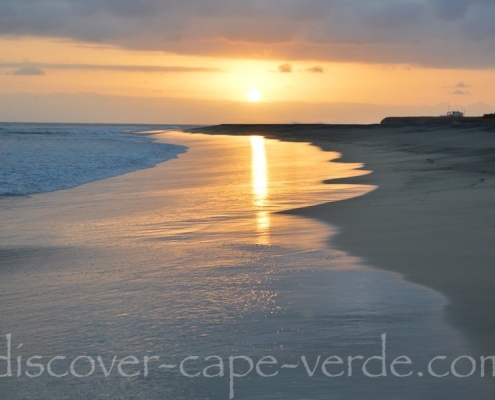 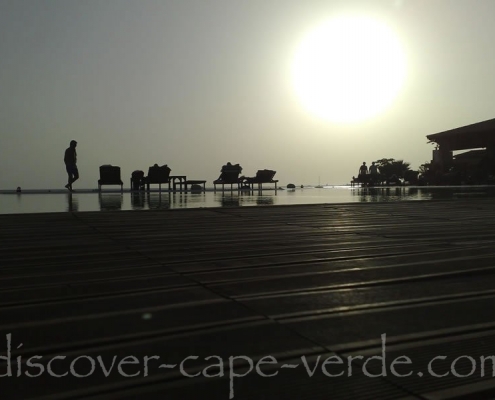 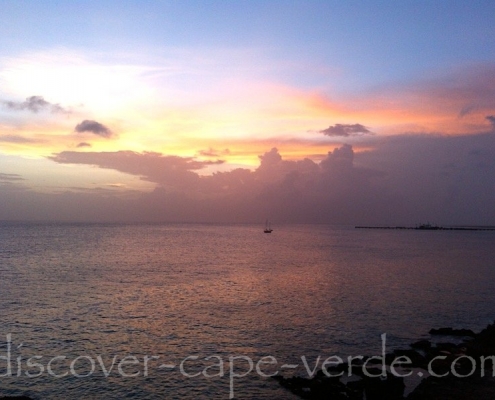 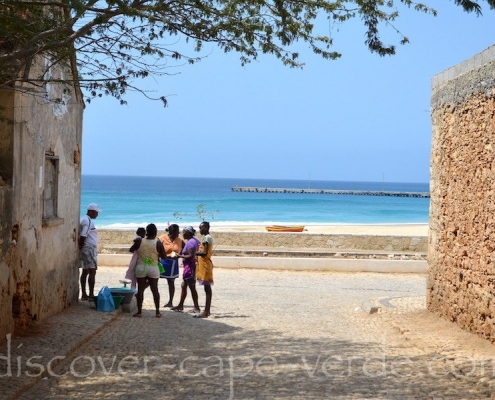 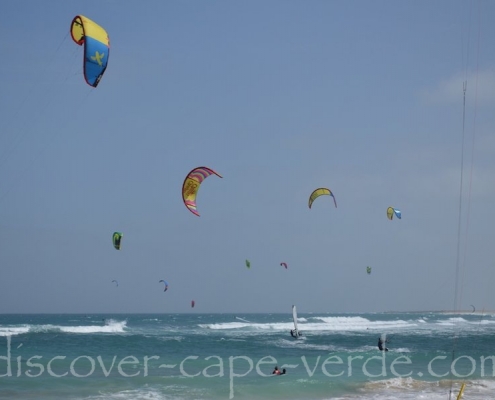 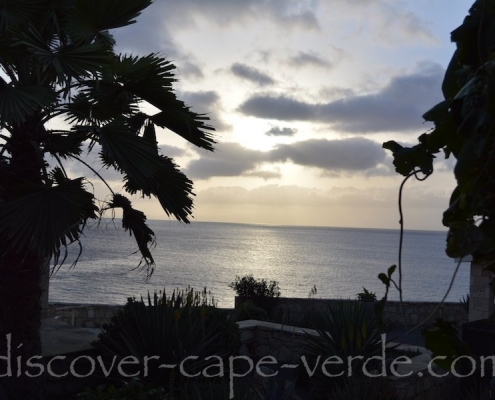 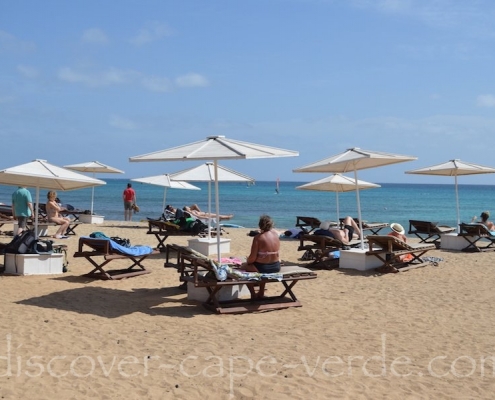 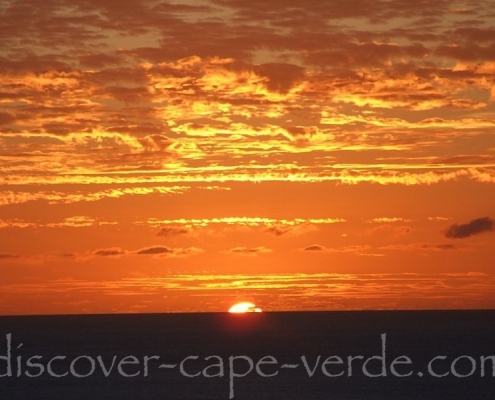 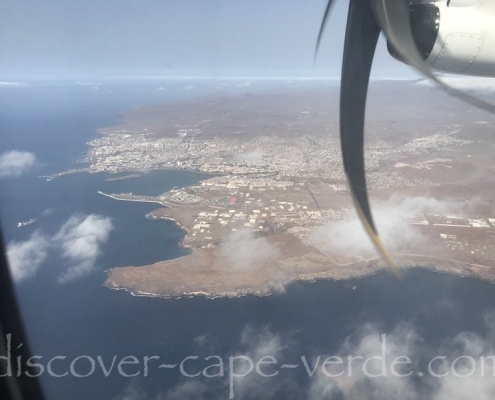 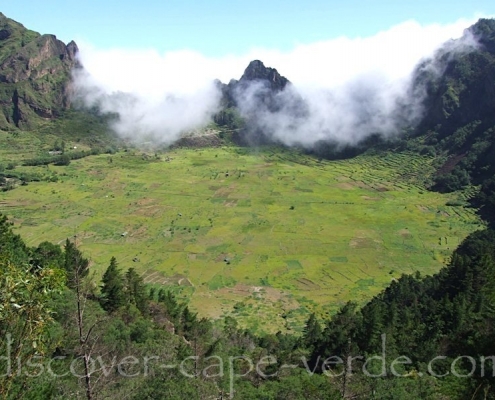 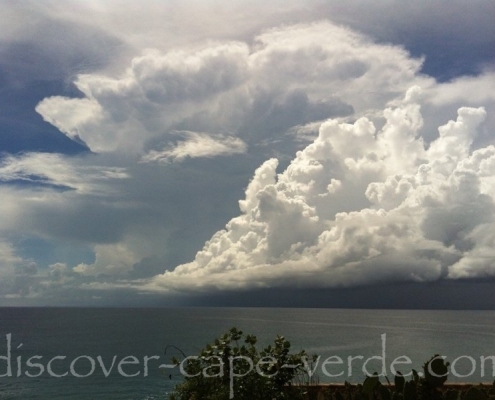 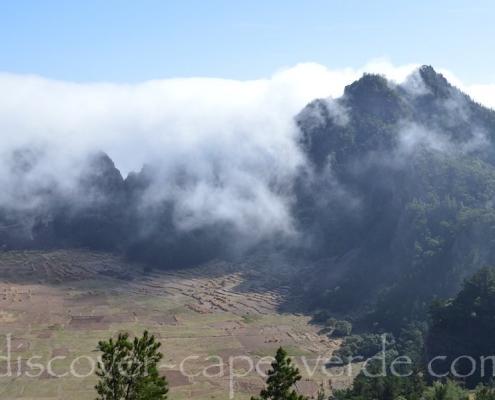 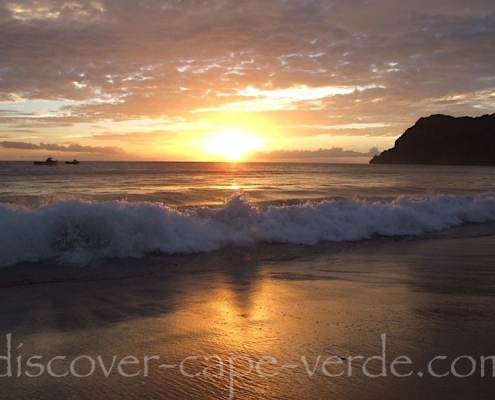 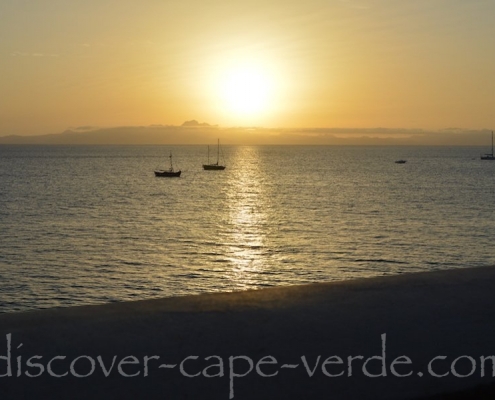 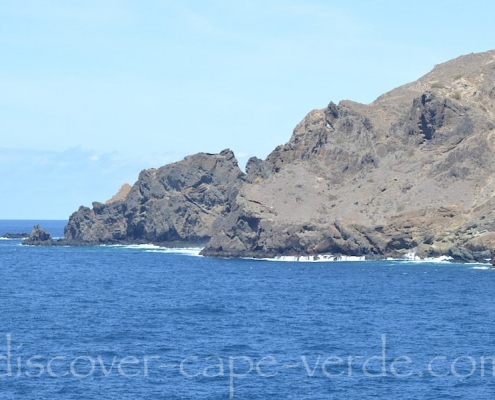