You are here: Home1 / News2 / Activities

END_OF_DOCUMENT_TOKEN_TO_BE_REPLACED 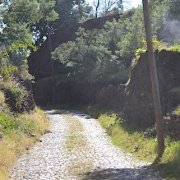 The Cape Verde islands have become a very popular beach destination, with thousands of tourists enjoying the beautiful beaches of Sal and Boa Vista each year. The beaches are a very good reason to visit Cape Verde, but the country is about so much more.

Cape Verde also is a fantastic destination for nature lovers and hikers. Most people traveling to the country for hiking and trekking choose to visit Santo Antão. This island is often seen as the most beautiful of all the islands of the archipelago. Santo Antão is reached by ferry from Mindelo on the island of São Vicente. Maybe you will need some accommodation in Mindelo on your way to or from Santo Antão.

Santo Antão is one of the world’s best kept secrets, with a huge number of routes, trails and paths. The island is also known for its spectacular valleys, small villages and local gastronomy.

Here are three of the best hiking routes of Santo Antão:

This route is special for a number of reasons. Almost the entire trail leads along the northeastern coastline of Santo Antão. The hike can either start in Chã de Igreja or Cruzinha. Finishing the hike takes around 5 hours, depending on where you start or finish.

The villages along this route are tiny, but unforgettable places. Coming from Chã de Igreja/Cruzinha you’ll reach Forminginhas first. This villages seems to exist of no more than 10 houses. The elementary school of the village was recently closed because of a very low number of ‘students’.

About an hour later it’s time to reach Corvo. Another tiny village, located at the end of an incredible valley. The beauty of Corvo becomes even clearer once the climb towards Fontainhas starts. This climb alone will take about half an hour, but is well worth it. Not only because of the view of Corvo, but also for what you’ll find on the other side.

Fontainhas became ‘world news’ back in 2015, when the Spanish edition of National Geographic named it in a list of Villages with the most beautiful views in the World. It truly is one of the most interesting places in Cape Verde.

Cova, Santo Antão’s ‘volcanic caldera’ is one of the most impressive places on the island. The drive up to Cova from Porto Novo takes you up the old mountain road. On the way to Cova, climbing almost 1.200 meters, you have an incredible view of a part of Santo Antão and also the island of São Vicente in the background.

The trail first leads down into the crater. Here, a few families live and use the fertile land. The trail then leads up a hill, where the path down to the valley of Paúl starts. The view of the valley from Cova is breathtaking.

As you reach Cabo de Ribeira there are basically two options: take a ‘Aluger’/Collectivo’ to Cidade das Pombas at the coast, or continue hiking through the valley of Paúl. The hike from Cova all the way to the coast takes up to 5 hours.

These two very special villages are located in a very secluded part of the island. The eastern part of Santo Antão, where the cities of Porto Novo and Ribeira Grande are located, is much more populated. It’s also the part of the island that receives the biggest proportion of visitors.

Tarrafal de Monte Trigo can be reached from Porto Novo in an hour and a half. It’s a beautiful drive with different types of landscapes. The two villages are home to a little more than 1000 people, and many of them make a living in the fishing industry.

The hike from Tarrafal de Monte Trigo to Monte Trigo is one of the most exiting routes on the island. This trail is only for experienced hikers, and can even be dangerous in some places due to a lack of maintenance.

It takes about 5 hours to finish the hike. Reaching Monte Trigo is a special feeling. This mysterious village can only be reached by two different trails, or by boat. On your way back, ask a fisherman for a spot on a fishing boat. Another unique experience, especially if you’re lucky enough to see dolphins playing around the boat.

If you plan to visit Santo Antão and would like to walk with a good local guide, we can recommend Lima Tours.

Freddy is the blogger behind MindeloCaboVerde.com. He loves to write about ‘the other side of Cape Verde’. He also works on Community Development projects through his foundation called Sonvela. 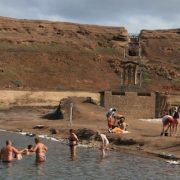 Salt has been produced in the Cape Verde islands since the 18th Century. Pedra de Lume on the island of Sal (Salt in English) was one of the main areas for production. In 1985 the operations at Pedra de Lume ceased, but the site has become an interesting place for visitors. You can see the remains of the conveyor system, that could transport 25 tons an hour. A bathe in the water, which is only about 600mm deep is an interesting experience. The salt water makes it easy to float, and the experience is similar to bathing in the Dead Sea. So, if you are visiting Sal, include Pedra de Lume on your itinerary and take a dip in the water. Take some suitable shoes to use in the pool because of the sharp salt crystals.

There are some festivals coming up during August and September. These include the Festival de Música de Calheta, 12 – 13 August in Calheta, Santiago; City festival (sport and culture), 21 August to 8 September in Vila do Maio, Maio; the famous Baia das Gatas Festival of Music, 11 – 13 August in Baía das Gatas, São Vicente and The Sal Music festival in September in Santa Maria. Enjoy the music that is such an important part of Cape Verdean life.

On 26 August 2017, there will be a night of garouper and poetry in Vila do Maio, on Maio island. This will be the third such event and combines the enjoyment of garoupa cooked in a variety of ways, combined with some enjoyment of the arts. Garouper is a variety of fish caught around the Cape Verde islands, but sometimes referred to as grouper or garoupa.